Community organizing gets the goods. And after successfully pushing East Chicago mayor Anthony Copeland to request disaster relief from the state, organizers with the East Chicago Community Strategy Group continue to voice demands. The Post Tribune featured the political flak after 18 of 45 homes in the Calumet community tested positive for elevated levels of lead in their drinking water. Labor organizer Ruth Needleman posted a full list of the community strategy group’s demands on her Facebook wall.

Today’s NWI Times offers a double feature of much needed historical context to the Calumet lead crisis. Lauren Cross shows that while lead exposure has overall declined nationwide, the odds of testing positive for elevated blood levels for those living in heavy industrialized areas is far greater. The historical extent is unknown and the records are proving hard to come by. The article features an excellent interactive map showing instances of elevated blood levels in children across the three county region.  “We don’t have great surveillance data, so it’s difficult to put in perspective.” says Dr. Bruce Lanphear, who recently spoke in East Chicago.

Sarah Reese takes a fascinating and detailed look at the sordid history of urban renewal projects in East Chicago in the 1960s, drawing from old Times and Chicago Tribune articles, but concludes it is still “unclear whether former officials knew the [environmental] risks associated with the project.”

Drinking water in eighteen homes in East Calumet have tested positive for dangerous levels of lead. This revelation comes after many months of residents and organizers keeping such concerns in the public eye.

In response, Mayor Anthony Copeland has finally asked for an emergency declaration from outgoing Indiana governor Mike Pence and Governor-elect Eric Holcomb. The Times report also notes that the EPA has suspended yard excavations as winter sets in.

The Post Tribune offers a good, long overview of how the crisis went public this summer and the many decades local and state official holders to protect people’s health.

This past Wednesday East Chicago mayor Anthony Copeland held his first public meeting since early August with affected Calumet residents. While the mayor defended his actions in addressing the crisis, organized residents stressed that it was not his lack of action but failure to communicate to his constituents that have angered so many.

The Post Tribune tallies the many lawsuits resulting from the Calumet lead crisis (three lawsuits filed in federal court, one in Lake County Superior Court, and six tort notices filed with the city.) The NWI Times looks at the $100 million suit filed by attorneys Walter Alvarez and Eric Pavlack.

The Post Tribune editorial board seems to think that Calumet residents will have a champion in Donald Trump. Because Michael Pence. Who never visited.

Kevin Stark from Pacific Standard returns to East Chicago and takes a look at the complicated Pastrick legacy in light of the recent civil rights settlement led by the Shriver Center.

Indiana Public Media took a look at the situation at the Nicosia Senior Building.

The health of seniors at ECHA properties in and near the Superfund site, and the poor response of the ECHA in getting the buildings and residents tested, has been addressed at many public meetings. Today the NWI Times reports that residents of the Nicosia building at 4720 Railroad Avenue, just outside the Superfund site, are showing elevated levels of lead in their blood, among other problems.

Northwest Indiana’s longtime congressman Pete Visclosky met with concerned Calumet residents on Sunday in a basement. An appropriate venue, considering that so many homeowners in the Superfund site are finding higher levels of lead and/or arsenic in their basements than they are in their poisoned yards. Residents expressed concerns with the chaotic moving process at West Calumet, the need for a disaster zone declaration, the need for lifelong health care, and the looming demolition of the West Calumet Complex. The Congressman made no assurances.

The 6th annual People’s Turkey Drive of East Chicago collected enough food to share with 400 families, including 40 families in Gary. One of the organizers, Juan “Weto” Fernandez, captured the spirit of the event, the holidays, and The Region in general before volunteers hit the streets:

“We got a lot of people involved in this and I just wanna say thank you again because it’s not about… none of that stuff I brought up doesn’t really matter in life if you’re struggling. If you’re struggling… that’s what happens to a lot of us. It’s people giving equal sacrifice. Some people donated one can, that’s worth as much as a million dollars that someone could have donated. So I just want to say again thank you again.

“This is the first year we’re doing this: We have a award we would like to give out, a special acknowledgement and one of the ones we’re going to hand out is to my friend Andy Garza right here… (applause) …” 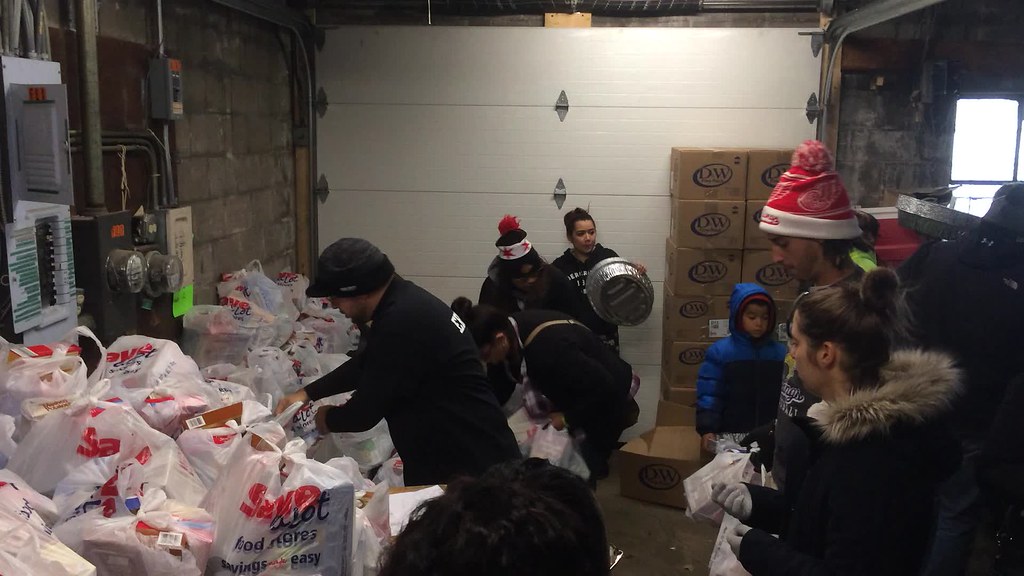 Calumet residents and their allies took their frustrations with East Chicago mayor Anthony Copeland to city hall yesterday. Among the many criticisms were his lack of transparency, his poor leadership in a crisis, and his prioritizing of demolition of community health. Both the NWI Times and Post Tribune covered the press conference outside city hall and the protest that occurred inside, as Copeland refused to meet with the group. The NWI Times produced two videos:

One East Calumet resident learned that lead dust contamination in her basement exceeds that found in her yard. Of the 7 basements tested by the EPA, 4 have shown high levels of lead and/or arsenic. East Chicago Undivided is encouraging all Calumet residents to ask the EPA to test their basements.

The Young Turks, the first nationwide news outlet to pay attention to the lead crisis, have returned to East Chicago for an update:

East Chicago Housing Authority filed noticed that West Calumet Complex residents who vacated due to health risks as far back as July 22 2015 can apply for a housing voucher and relocation benefits.

Attorneys Walter Alvarez and Eric Pavlack has filed an intent to sue a wide array of local, state, and federal officials on behalf of 251 West Calumet residents. Office holders receiving the notice of intention include East Chicago Mayor Anthony Copeland, East Chicago’s public and environmental health department, the Indiana Department of Environmental Management, the Indiana Department of Health, the state of Indiana, Gov. Mike Pence, and the School City of East Chicago.

Chicago magazine featured the work of photojournalist Alyssa Schukar, who is no stranger to East Chicago. Her photographs of Marktown residents still adorn that former planned workers’ community.

The East Chicago Redevelopment Commission has approved $200,000 of rehabilitation projects, including one in the East Calumet neighborhood, zone 3 of the Superfund site.

The Veterans Day holiday was cited as one reason by the ECHA for the slow dispersal of checks to West Calumet Complex residents who are prepared to move but are still awaiting their promised funds. According to the NWI Times, ECHA attorney stated that checks will now be cut twice a week.

Calumet residents want a formal role in determining remediation processes in their community. And they want the EPA and all responsible parties held accountable for any and all promises made. Attorneys from the Northwestern Environmental Law Clinic, Goldberg Kohn, and the University of Chicago Law School’s Abrams Environmental Law Clinic – all representing the Calumet community pro bono – filed a motion before the Department of Justice and the Indiana attorney general’s office.

A cavalcade of Democratic candidates for state and local office paraded through Northwest Indiana yesterday, but they did stop in East Chicago. Members of Black Lives Matter NWI/Gary and National Nurses United attended a rally at Wolf Lake in Hammond to remind the candidates of the situation in Calumet.

At this past weekend’s CAG meeting East Chicago Undivided and the USGS discovered that the “clean sand” level the EPA is excavating down to isn’t so clean. An astute Calumet resident took a sample while his yard was excavated and an on-the-spot analysis showed 108ppm in the so-called “clean sand.”

An Associated Press report on the West Calumet Complex/HUD settlement is making the rounds today.

Lauren Cross of the NWI Times took to Twitter last night to break down the deal reached between the US Department of Housing and Urban Development and the East Chicago Housing Authority and the Shriver Center of Poverty Law, representing past and present residents of the West Calumet Complex. The Post Tribune also reported on this “big relief” for residents. The Shriver Center released this press statement.